The stigma around pregnancy and baby loss is slowly and gradually starting to decrease. We hear stories from women who have come forward to tell their loss stories. But even today, the fathers rarely discuss it. We often forget about the fathers who are grieving too. The bereaved father hears “Be strong for her” far more often than “How are you doing?“.

Here is a baby loss story from a father’s perspective. Shivaram talks about losing his son Viren.

My name is Shivaram and I am Viren’s father. Born in the US after 27 weeks of pregnancy, Viren passed away on Feb 21, 2020 after 20 days in the Neo-natal ICU.

Our pregnancy, which had mostly been smooth, took a turn for the worse on Feb 2, 2020 – without any warning or symptoms. My wife Priya woke up at 5 AM that day suspecting that her water broke. We nervously called the hospital seeking advice, and they asked us to come in right away. Although I didn’t want to imagine anything untoward, I was growing concerned by the minute. I tried not to show it, out of fear of scaring Priya even more. Until we saw the doctor, I tried to maintain a neutral disposition.

Within seconds of hearing the baby’s erratic heartbeat, the chief doctor concluded that the baby was going through fetal distress. She declared that an emergency C-section was needed immediately to save the baby. I went numb with shock – Do I intervene? Do I ask the doctor for other options? Do I call folks back home to get guidance? Priya looked shocked and terrified.

I watched in shock as they wheeled her into surgery before I could ask or do anything. What followed was easily the most difficult hour of my life.

The medical team disappeared, leaving me alone in the examination room with no explanation on what was happening. Both our families were thousands of miles away. As I waited, I felt very alone and without counsel. I didn’t know where and how my wife was, I didn’t know if the baby survived and if he did, I didn’t know where he was being treated. My head was spinning at how fast everything had happened.

I ended up calling our families to inform them. Then, I tried to locate Priya. I wanted to be by her side when she woke up from surgery. It was a huge hospital and by the time I located Priya, the surgery was over. Our baby boy had survived and Priya was in severe pain. For the first time in two decades, I shed tears when I saw my wife lying alone in pain, in a remote corner of the hospital.

We named our boy Viren (which means “brave warrior”) and he was admitted in the NICU.

Thus began our cycle of visiting the hospital at least twice a day and spending as many hours as possible with him, endless conversations with doctors, nurses, breathing specialists, lactation specialists, billing experts, insurance professionals, and our employers. We had no idea if our son would live, and if he did, what would be his quality of life. All this, while Priya was still in pain and recovering from her C-section.

As a husband and a new father, I did not know where to focus my energy. Do I help Priya get better or do I engage even more with the doctors for Viren’s sake? It felt like a terrible position to be in.

In between, there would be days that truly lifted my spirits.

Viren would breathe with minimal support, show good milk intake, test results were favorable. And then there were days when nothing would go our way. It was a roller-coaster ride. Amidst all this, I was lucky to experience the little joys of fatherhood like changing his diaper every day, holding him in my arms, talking and reading to him. Seeing our brave warrior fight against all the odds gave me immense strength – I drew genuine inspiration from him.

With each passing day, I truly started believing that our son would not only survive, but would make a full recovery and lead a normal life, despite being born three full months early

At 5 AM on Feb 21, we got a call from the hospital. The moment the phone rang, our hearts sank and we feared the worst.

There was no other reason for a hospital call at this hour. We found out that our son had passed away after sudden breathing difficulties. He had lived only three weeks in total. We were both numb with shock and just held each other in despair. The weeks that followed seemed pointless and empty.

As a father, I felt robbed of life’s most wonderful gift. Our world came to a stand-still. Car-seats and strollers would trigger me back to that fateful day. In addition to my own grief, I was worried about how difficult it would be for Priya to get through this tough time as a grieving mother.

It was painful to see my wife suffer day in and day out.

Priya’s biggest fear was that the world would forget our son and move on. Realizing this, I started to actively talk about our son and our fond memories in the short time he lived. I did not distract her away from the grief by changing topics of conversation or by side-stepping any mention of our son.

There would also be times when I didn’t share with my wife how much I was hurting inside. Looking back, I should have opened up a lot more to her because I later realized that consoling me made HER feel stronger. Listening to me and making me feel better made her feel less lonely in grief. I realized it was okay to be vulnerable and give your partner the genuine opportunity to take care of you and to make you feel better.

Over the next few months, I realized I had to find the right people to open up to – as a father/man, you are expected to be everyone’s rock and to not show any outward emotion.

I felt it was important for us to acknowledge the grief that came with something as traumatic and painful as a baby loss. Otherwise, it would manifest itself in mentally unhealthy ways.

“Be Strong for her” was something I heard a lot. While this is true, it’s imperative that the father channels grief/emotions the right way by seeking professional help or by finding someone in the inner circle to talk to. I spoke to a therapist and took help of a baby loss support group to navigate through my tough time. Our family and friends became our complete support system – we will forever be grateful to them. 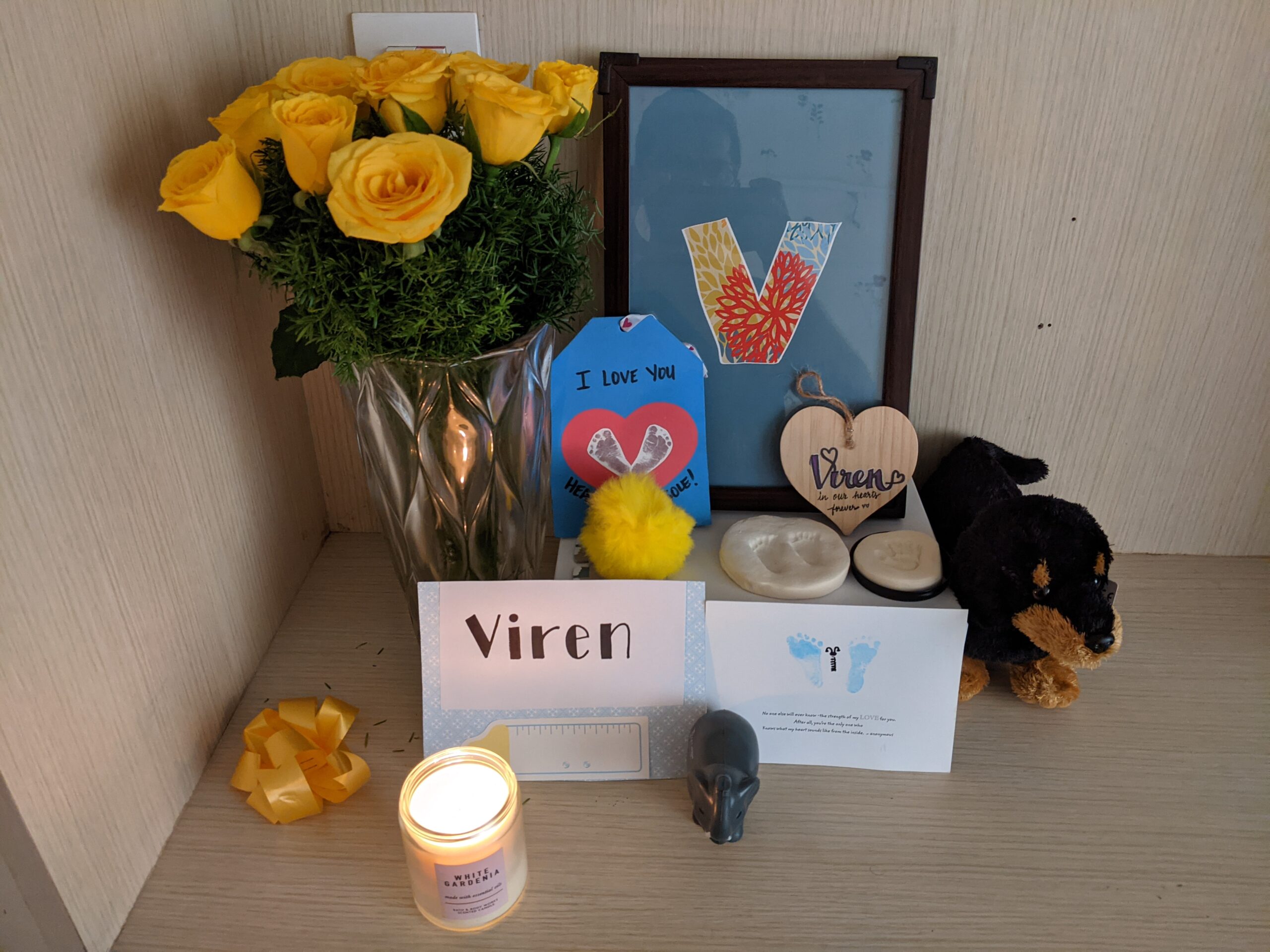 Looking back now, I realize no can prepare for a situation like this because we never think something like this could happen to us. I came to understand that this too will pass. Viren will always be our first child and we will forever cherish every minute he lived and the joy he brought as our son. We can never “move on” in life after our baby loss, but we strive to “move forward” with his memory and think of him fondly at every opportunity.

Fathers are impacted by loss too. They love, they lost and they grieve..Just a bit differently -Jessi Snapp

Delayed Miscarriage in First Trimester and in times of COVID

This is what grief does to a mother